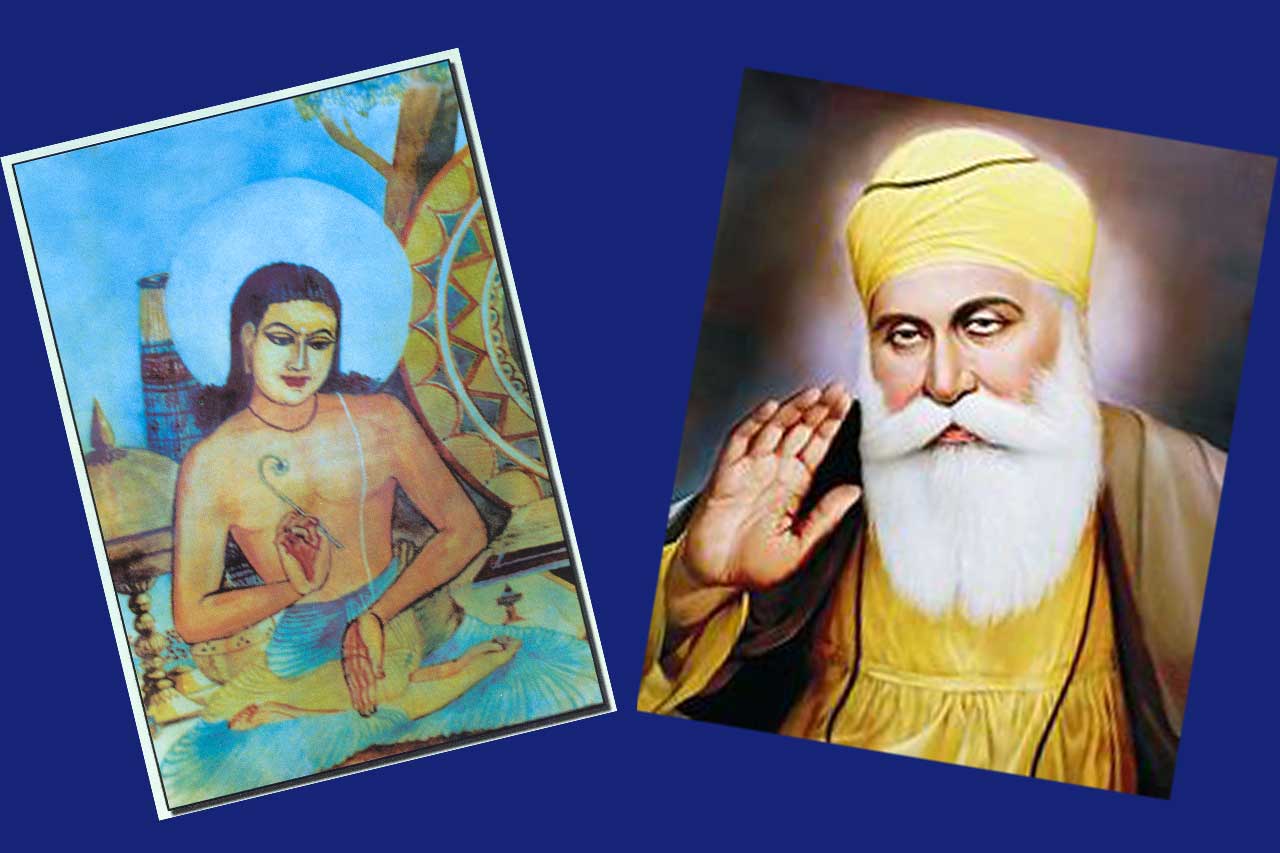 The holy land of Bharatavarsha, a wider concept than the present-day India, has seen emergence of many saints and reformers over the milleniums. But there have been very few who have revolutionized the entire socio-economic scenario of their respective regions together with religious movements, like Mahapurusha Srimanta Sankaradeva (1449-1568) and Guru Nanak (1469-1539) did. The social systems maintained by the subscribers of Srimanta Sankaradeva’s Eka Sarana Nama Dharma as well as Guru Nanak’s Sikh religion are quite distinct from the other socio-cultural milieu prevalent in the sub-continent of Bharatavarsha. Both the orders are characterized by absence of the malaise faced by the other orders in this sub-continent. There is no caste difference, no priest community, no hierarchy among the devotees, no disparity among the devotees while distributing offerings and no parasitic dependence on the society at large for the sustenance of the order. Most importantly both the orders have democratic management of their institutions.

The enormous similarity between Srimanta Sankaradeva’s Eka Sarana Nama Dharma and Guru Nanak’s Sikh religion is not surprising. Different written records of Sikh religion under the title Janamsakhi, which are considered the closest records of the life events of Guru Nanak, categorically mention his visit to Kamrup (Brahmaputra valley) and meeting with Srimanta Sankaradeva.1 Sikh scholars have agreed that there is no difference between the philosophy of Guru Nanak and Srimanta Sankaradeva. They also say that this could only be so if one had imparted or discussed his philosophy with the other and impressed with his thought process.2 It is pertinent to note here that whereas Guru Nanak was born in 1469, Srimanta Sankaradeva had been proselytising since 1468 itself, when he initiated eminent scholar Mahendra Kandali and enacted the religious play ‘Chihna-Yatra’.3

It may be mentioned that absence of idol is an important feature in both the orders. Both Eka Sarana Nama Dharma and Sikh religion have holy books in the altar instead of any idol. They keep Gunamala and Granthsahib respectively in the altar. This has had far-reaching consequences and immense socio-cultural impact in both the orders. Idolatry has always been associated with the priests, as the very presence of idols implies the necessity of a special class of people who are authorized to perform worship of those idols. Any idol required a methodical way of worshiping it; which gave rise to a priest class, who over time became perpetrators of extortion as well as suffocating customs. By doing away with the very idol itself, both Eka Sarana Nama Dharma and Sikh religion did away with the necessity of the priest class, which had till then been an essential attribute of any indigenous religious system in the sub-continent. So Srimanta Sankaradeva and Guru Nanak did not only remove idols from their religious system, but they also removed middle-men from the religious system itself. That was a great revolution in the medieval period. A new paradigm was developed. The traditional difference between priests and other common devotees no more existed in the new paradigm. The new egalitarian paradigm also had no scope for caste-based social differences.

The issue of caste difference and caste conflict have been haunting the Indian society since long ago. Therefore the removal of class difference from the religious system by Srimanta Sankaradeva and Guru Nanak by removing idolatry was an epoch-making change. It also became the beginning of many other changes. The suffocating system of caste difference in the society that prevailed in the medieval period had also been strengthened by the class difference embedded into it, as the original occupation-based Chaturbarna caste system of Vedic era had long given way to class difference based caste system in the entire sub-continent. A Brahman was no longer a repository of knowledge that Chaturbarna implied, but perpetrator of inequality and extortion by way of religious tax. Srimanta Sankaradeva and Guru Nanak striked at the root of this malaise. Their removal of idolatry took away the very sustenance of the caste system. This malaise is therefore totally absent in both Srimanta Sankaradeva’s Eka Sarana Nama Dharma as well as Guru Nanak’s Sikh religion.

It is a corollary of the above-mentioned features that there is no hierarchy among the devotees in both Eka Sarana Nama Dharma as well as Sikh religion. Whether it is Kirtanghar of Eka Sarana Nama Dharma or Gurudwara of Sikh religion, all devotees sit on the same level in their place of worship. No raised seat is kept for any devotee. No one gets any priviledge during the community prayer in either Kirtanghar or Gurudwara. Any person can enter and participate in the community prayers in both the orders. Both the Kirtanghar of Eka Sarana Nama Dharma and Gurudwara of Sikh religion are open to all people.6 The liberalism is the most important feature in both the orders. There is no disparity among the devotees in any function, not even while distributing Prasada (offerings to God). The community kitchen known as Langar has famously continued that tradition in Sikh religion. Not only the feature of community feast, but also an element of altruism characterize the functioning of Langar; poor and downtrodden are fed there. This altruism was an important component of Srimanta Sankaradeva’s teachings, who preached that one should see God in every being.7

Democratic management of the religious institution is another striking common feature of both Eka Sarana Nama Dharma and Sikh religion. Both Kirtanghar of Eka Sarana Nama Dharma and Gurudwara of Sikh religion are managed by democratically elected bodies. Even when the Kirtanghar belongs to any hereditary Sattra, the residential institution that propagates the legacy of Srimanta Sankaradeva, it is inevitably managed by a body which is elected from among the disciples associated with that particular Sattra. This legacy has been possible as Srimanta Sankaradeva introduced decentralized leadership in the Eka Sarana Nama Dharma, democratic management being a corollary of decentralized leadership.8 Similarly the Gurudwaras have their Gurudwara Prabandhak Committees, which is elected at regular intervals. This tradition started with the founders of the orders. Neither Srimanta Sankaradeva nor Guru Nanak gave any special treatment to own family members. Devotees received the greatest care from both of them. Srimanta Sankaradeva made his disciple Madhavadeva his successor, not any of his sons. Similarly Guru Nanak made Angad his successor, not any of his sons.

The most unique feature of both Eka Sarana Nama Dharma and Sikh religion is the non-dependence on the society at large for the sustenance of the order. The traditional approach of religious institutions being dependant on donations of devotees or disciples is absent in both the orders. The devotees associated with any Sattra or Gurudwara manage whatever is required for their sustenance by generating resources by own toil. They do not beg from others. Instead they work, like any other person in the society. The devotees living in any Sattra cultivate land to grow own food and also engage in several other occupations like teaching, transportation etc. This work culture is embedded in the orders by the founders, because of which both the orders have penetrated the society so deeply and survived over the centuries. Srimanta Sankaradeva advised his disciples not to beg.9

The egalitarian socio-economic perspectives of both the orders Eka Sarana Nama Dharma and Sikh religion is the major source of their strength. It is the egalitarian perspective which makes the two orders stand out among all. Both used vernacular languages to communicate with common masses, unlike the saints of yesteryears who communicated in Sanskrit alone. Although the concept of Bhakti was already there in the scriptures, the special emphasis given by the duo on it had catalytic impetus from the Sufis. While this may be only a guess in case of Srimanta Sankaradeva, Guru Nanak was closely and explicitly influenced by the Sufi culture; he joined the Sufis for some time and also visited Mecca during one of his travels.10 But one thing was certain. The socio-economic changes in the medieval Bharatavarsha left distinctive marks on both the saints and their orders.

It was the egalitarian philosophy of the two orders that gave rise to a new socio-economic homogeneity, which was missing in the other Bhakti orders. The evolution as a homogenous group helped growth of common political interests too. That was why massive upsurge could occur against the tyranny of the rulers. They rose to a man against royal order for conversion to the faiths promoted by the royalty. There were Moamariya uprising (1769–1805) by the followers of Eka Sarana Nama Dharma against the Ahom regime, who were promoting the Shakti cult and the armed conflict of the followers of Sikh religion with the Mughal regime, who were promoting the Islam. These conflicts marked the two orders as distinctive ones in the annals of Indian history. Both the Ahom regime and the Mughal regime were weakened considerably by these conflicts, thereby hastening their downfall.