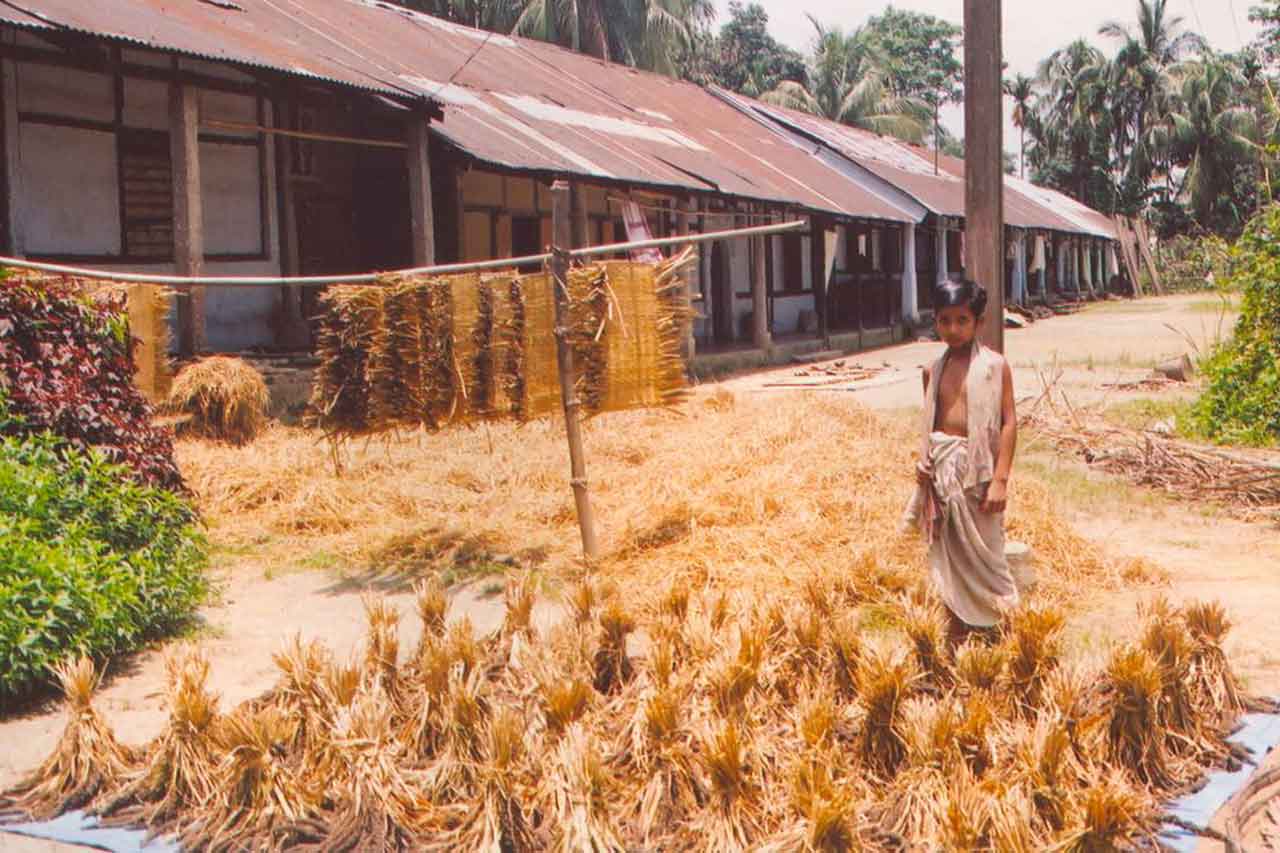 Srimanta Sankaradeva (1449-1568 AD) was an unprecedented genius in the annals of world history, as he contributed many original works to the humanity. His creations are now parts of our common heritage. One such heritage is the Sattra institution. In his time, it was known as Thân. The institutional complexes set up during his life-time were known by that name only. Later on the name Sattra came to be used in Eka Sarana Nâma Dharma, the religious order founded by the saint. This Thân or Sattra institution has guided the socio-economic lives of the people of Assam over half a millenium.

The Thân or Sattra institution has a unique management system. The devotees living in this institution are allotted productive resources on an equitable system. Lands belonging to the Thân or Sattra are divided among them, which they have to cultivate to eke out their living. This egalitarian community life promoted by Thân or Sattra is certainly a subject matter of socialist philosophy. Other such community organisation across the world like Commune of China, Kibbutz  of Israel came up much later. It may be noted that Thân or Sattra has greater flexibility compared to Commune or Kibbut. This has also prolonged the life of Thân or Sattra, which survives till today, compared to Commune and Kibbut, which have almost disappeared with changing polity. When that Thân or Sattra came up in the Brahmaputra valley in the fifteenth century, the prevailing system was that of semi-feudalism. That such an egalitarian island could be created by Srimanta Sankaradeva in an era of semi-feudalism proves his extra-ordinary genius. He was constantly at loggerheads with the feudal kings trying to uproot him or at least prevail over him. Carving out an independent institution within a semi-feudal kingdom was no small achievement. It was his acumen that helped him, as he came from a family or rulers himself. All these are certainly interesting academic issues pertaining to Political Science.

The Thân or Sattra was developed as a self-sufficient unit, comprising of different production and trading activities within it. Everyone living in Thân or Sattra has to work. All food requirements of the residents in Thân or Sattra are grown in the land owned by the devotees. Perhaps Srimanta Sankaradeva was the only religious Guru in the world, who did not depend on his disciples for livelihood. Several tiny industries like weaving units are accommodated by each Thân or Sattra. Srimanta Sankaradeva himself used to supervise such units in his time. Almost all the devotees living in the Thân or Sattra engage in some productive activity or trading activity, never depending on others for living. Different occupational groups live in the Thâns or Sattras. There are launderers, scholarly Brahmins, tribal farmers and even Muslim weavers in Thâns or Sattras. Many artisans-cum-devotees live within the campus; they manufacture the commodities or offer the services required by the other devotees. The Bhuyan community from which the saint hailed were also famous for their textile designs. So all requirements of clothes were fulfilled by the families of the devotees themselves which continues even today to some extent. So Srimanta Sankaradeva has left a successful model of economic self-sufficiency for community living. Economists may examine his model to explore viability for replication in the present time.

After Srimanta Sankaradeva’s passing away the Ahom kings patronized the Thâns or Sattras in a big way, doing away with its self-sustained character. The Sattras were converted to power-centres with enormous wealth and tax-free land conferred upon by the kings. After independence from British, this institution has however gone back to the principle laid by the saint, with most of their wealth liquidated or requisitioned by the government. The Sattras now operate in self-sustained manner to a great extent. A part of the land belonging to them is given to the devotees, who reside within the Sattra complex, for livelihood. The remaining land is cultivated upon and the proceeds is used for the maintenance of the Kirtanghar under the care of the Sattrâdhikâr, the head of the Sattra. However the Sattrâdhikâr does not perform the cultivation work himself. It is done by the agricultural workers on tenancy basis. Most of the Sattrâdhikârs perform as managing trustee of the Sattra property. Barring a few cases, he is not an absolute owner of the Sattra property. Thus the role of a Sattrâdhikâr is not similar to that of the abbots of other religious institutions of India. The concept of Gandhian Economics has been fully implemented in the Thâns and Sattras, because of which Mahatma Gandhi praised Assam highly. So whereas Gandhian Economics remains a utopia elsewhere, it is realised in practice in Assam. A Sattrâdhikâr is like a Trustee of Gandhian Economics.

The economic activities that happened within its precinct, were sponsored by the Thân or Sattra itself and they continue to do so. This tradition was started by Mathuradas Burha Ata, the first Sattriyâ of the Barpeta Thân. The Thân maintained a fund named Hâti-puji (community fund) from which money was lent to the people for economic activities. Thus the Thân or Sattra instituted the banking system and micro-financing in Assam in the medieval period itself. This model has withstood the test of time. Different parts of the Barpeta town are known as different Hâti even now as they were affiliated to different traditional fund units. These are academic issues pertaining to Economics and Commerce.

Srimanta Sankaradeva advised his disciples to carry out their responsibilities as responsible citizens. He never asked anyone to shun work. He once asked Narayandas Thakur, a rich devotee, to keep one third of his income for self-consumption, one third for charity to other devotees and the remaining one third for paying tax to the royalty. Clearly the saint advocated the rate of one third taxation, which also happens to be almost the highest slab of taxation in modern India, which is 30 %. This shows acquaintance of the saint with Public Finance. Of course this was no surprise as he once ruled over the middle Assam till he bequeathed that responsibility to his relatives. Notably he dispensed with this method of revenue generation as far as his Thân or Sattra itself was concerned. He adopted another model, exuding the feature of self-sufficiency, as explained above for Thân or Sattra. Clearly he was a capable Economist, who could create numerous systems appropriate to the beneficiaries.

Srimanta Sankaradeva adopted innovative measures like crowd funding when such necessities arose. He collected fund from all devotees during pilgrimage for procurement of provisions or to finance the trips of poor devotees. Such attempt at pulling fund makes him an interesting subject matter of Public Finance. However these fund drives were limited to the circle of devotees and for their purposes only; the saint never solicited fund from anyone outside the order nor did he ever solicit fund for himself. The niceties of his activities will impress any academician.